Barry Kauler has announced the release of a new version of the Puppy Linux distribution. Puppy Linux provides users with a lightweight, installable live CD which strives to be easy to use. The new release, Puppy Linux 6.3, is built from Slackware packages and is available in 32-bit and 64-bit builds. "It has been awhile since the last announcement of an official release of Puppy Linux, 6.0.3 'Tahrpup', starting with 6.0 in October 2014. Mick Amadio, the coordinator for Puppy built from Slackware 14.1 binary packages, has brought Puppy to a new release, version 6.3. This is distinct from Puppy 6.0.x, which is built from Ubuntu Trusty Tahr binary packages, coordinated by Phil Broughton. Mick coordinated Puppy 5.7.x which is also built with Slackware packages. For the first time, Puppy is released in both 32-bit and 64-bit versions.". 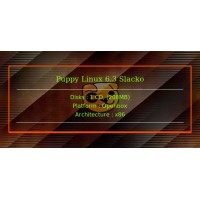