Puppy Linux 5.6 "Slacko" edition, a small and fast distribution built from and compatible with Slackware's binary packages, has been released: "This is an improved version of the successful Slacko 5.5. The biggest enhancement in this version is full support of the f2fs filesystem. Slacko 5.6 has many improvements due to the heavy development of the Woof build system and the many bugfixes to the Slacko base packages (independent from Woof). Lots of packages have been updated for the 5.6 series including but not limited to the following: improved SFS Manager, Updates Manager, improved graphics support, updated ffmpeg-2.0 and supporting programs including Pmusic and Mplayer, Abiword-2.9.4 and geany-1.23.1, Sylpheed-3.3.0, Firefox ESR, plus many other updated programs. Slacko 5.6 is available with a choice of kernels, 3.4.52 (with f2fs patch) compiled for processors that do not support PAE, and 3.10.5 for processors that do.". 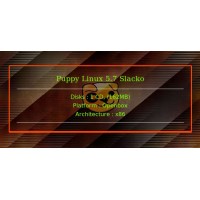