Jerry Bezencon has announced the launch of Linux Lite 2.4. The new version of Linux Lite features smooth upgrades between point releases. There have also been a number of improvements, including VPN support and the installer now supports disk encryption. "With the release of Linux Lite 2.4 Final, we continue to evolve into a fully featured, light weight free operating system. Major announcement - there is now an upgrade path on Linux Lite from within the LTS series for each release, update your current install from now until April 2016 with one click, see below for details on this. There are enhancements to Lite Software, Install Updates, Lite Tweaks and Network Share Settings. Bountysource has been a major factor in our ability to enhance our software. By paying developers to help improve our software, we improve the quality and usability of our applications. Disk encryption and LVM is now supported - see below for details. There is added support for exFAT, Android MTPFS, VPN connections and NTP to name a few. You get the latest Whisker Menu, there's a new default Terminal theme, and the Windows (Super) key now opens the Menu." . 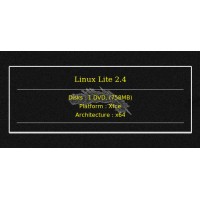